Eating spinach every day could make your brain 11 years younger 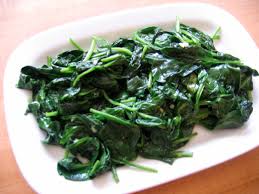 Eating spinach every day could make your brain 11 years younger

Your mother was right to tell you to eat your greens: just one portion a day could help stave off dementia

Good for you: greens such as spinach can slow cognitive decline, researchers claim

We all know that vegetables are good for us – but did you know that eating just one portion of leafy greens a day could stave off dementia?

Researchers at Rush University in Chicago evaluated the diet and mental ability of around 950 older people every year for two to 10 years.

Participants, who had an average age of 81 years, participated in 19 tests to assess their mental function and identified, from a list of 144 items, what food and drinks featured in their diet.

Those adults who ate leafy green vegetables such as spinach and kale once or twice a day experienced significantly less cognitive decline than those who did not, even when other factors such as education, exercise and family history of dementia were taken into account.

Om average, participants who ate greens halted their mental decline by an average of 11 years, the researchers revealed this week at the Experimental Biology Conference in Boston.

Lead researcher Martha Clare Morris said: “Losing one’s memory or cognitive abilities is one of the biggest fears for people as they get older. Since declining cognitive ability is central to Alzheimer’s disease and dementias, increasing consumption of green leafy vegetables could offer a very simple, affordable and non-invasive way of potentially protecting your brain from Alzheimer’s disease and dementia.”

Morris said that the benefits of leafy greens were probably linked to their high levels of vitamins and nutrients, such as vitamin K, lutein, folate and beta-carotene.