The keys to starting a business in retirement 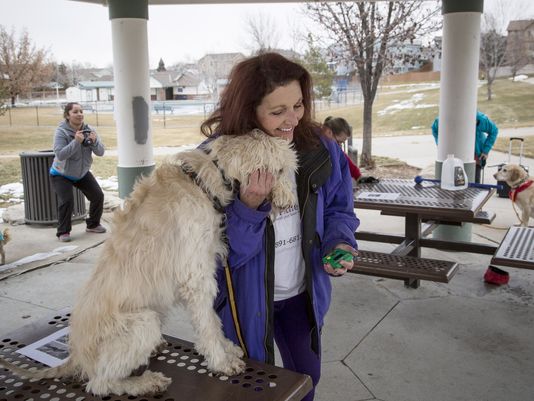 Isabel Chamberlin was suffering from “severe career burnout and stress” after more than 40 years in corporate sales, so at age 60, she quit her job.

She went back to school to become a certified personal trainer and combined her love for fitness and dogs to create her own business, Paws4Fitness, and now the Centennial, Colo., resident conducts boot-camp exercise classes and yoga classes where people bring their canines.

The owners and their dogs work out together, running around cones and jumping over hurdles as they are able in the boot-camp classes. In the yoga classes, the owners do the exercises while the dogs mostly relax. Chamberlin, 62, also works as a personal trainer with private clients and a dog walker.

Although she’s not making nearly as much she did before, Chamberlin says she’s in great shape, having fun and determined to grow her business. “I changed my life so I could help others change theirs.”

Isabel Chamberlin, owner of Paws4Fitness, a company that trains people and their dogs, which she started after 40 years in sales, conducts a bootcamp class in Aurora, Colo. (Photo: Nathan W. Armes/USA TODAY)

More people are starting businesses later in life, says Deborah Banda, AARP‘s interim vice president of the financial security team. “It can be a way to strengthen their financial security, and it can give people great personal satisfaction.”

Almost a quarter (23.6%) of new businesses were started by entrepreneurs ages 55 to 64 in 2013, an increase from 14% in 1996, according to the latest data from the Kauffman Index of Entrepreneurial Activity.

Banda believes there are a couple of reasons for this trend. “A lot of older workers lost their wage-and-salary positions in the recession, and they haven’t been able to find another one, but they still need an income so they are hanging up their shingle.”

And people are living longer, healthier lives, which is often called the longevity bonus, she says. If they retire in their 60s, they may have 15 to 20 productive years ahead. They are looking at this chunk of time, and they want to do something different, something they weren’t able to do when they were younger, she says.

The driving forces behind the silver entrepreneur movement are necessity and inspiration, says Catherine Collinson, president of the nonprofit Transamerica Center for Retirement Studies. The center’s research shows that many baby boomer workers plan to work past age 65, either full time or part time, with a phased transition into retirement. However, achieving these expectations may be difficult if not impossible at their current employer, she says.

“Few employers have business practices in place to accommodate them. As an alternative, baby boomers can become entrepreneurs,” Collinson says.

Some of the best enterprises are started by people who pull together different threads from previous jobs, hobbies and interests, says Nancy Collamer, author of “Second-Act Careers: 50+ Ways to Profit from Your Passions During Semi-Retirement.”

Instead of totally reinventing themselves, many people are repurposing or recycling their skills, she says. Some become consultants. Others take a craft, hobby or other idea and find ways to sell or market it, she says.

The Internet allows entrepreneurs to do these things more easily and inexpensively at home instead of going out and getting a storefront, Collamer says. For instance, people with crafts to sell can use sites such as Etsy.com.

Art Koff, 79, has reinvented himself a couple of times. After he left advertising in 1997, he worked as an advertising consultant for several years, and then in 2003 he founded RetiredBrains.com, a site that covers a wide range of topics for retirees and pre-retirees, including helping them find jobs and start businesses.

“Many visitors to RetiredBrains.com have told me that they worked all of their lives, and when they retired they looked forward to traveling, playing golf and visiting the venues they never had time to visit, but the problem they said was that after a while they became bored.

“They were used to getting up early in the morning and going to work. They were used to challenges and a full day of doing something. Starting a business was a way to get back into the game.”

He has heard many success stories, including a woman who has a concierge business, running errands for her clients including buying groceries, shopping for gifts, arranging parties, making vacation plans and taking care of their pets while they’re on vacation.

Another person he knows built a business cleaning out and organizing garages. Still another has an enterprise where she helps people downsize. And there’s a husband-and-wife team who sell cookies based on his grandmother’s recipe, and it has grown into a business where they sell thousands of cookies daily, Koff says.

Collamer recommends that older adults be careful about how much of their own money they invest in their business because if it doesn’t go well, they have less time to earn the money back. “The general rule is: You shouldn’t invest more than you can afford to lose. That can be a really tough reality for people.”

Budding entrepreneurs sometimes use their retirement funds to start their businesses, but Banda advises against it. “We strongly recommend that people don’t tap into their retirement savings to fund a small business. It’s too dangerous.

“If you do use your retirement savings, and the business goes under, your nest egg may be gone, and you are at point where you have fewer years to rebuild it,” she says.

Chamberlin is running her business on a tight budget. She markets her business through Facebook and other cost-effective outlets and is mentored by several other dog-related business owners. She’s optimistic about her future. “I want to keep doing this. I really do want to help people. There are so many people who are in bad physical shape. I’m certainly not ready to retire.”

Collamer and Banda offer these tips for starting a business:

¦ Evaluate your tolerance for risk. “If you tend to be risk averse, think about selecting a business with low start-up costs,” Collamer says.

¦ Scrutinize your idea. Try to determine if it’s a good business idea, whether you’ll feel comfortable doing it, if there is a need for your services or product, what makes you different from your competitors, who is going to buy your products or services and whether you are qualified to run this business, Collamer says. After you work through this, then test the idea by taking small steps, she says.

¦ Plan on all fronts. You have to have a business plan, financial plan, marketing plan, social media plan, Banda says. “You can make the most fabulous cranberry-nut cookies on the planet, but if you want to turn them into an income stream, you have to turn it into a business.”

¦ Learn about the business of running a business. Figure out how to do the books and learn about any relevant regulations, Collamer says.

¦ Run the numbers to see if this is a viable business. “It’s tough to estimate sales when you don’t have any sales,” she says, “but you need to think about whether you’re going to have 10 customers or 50 customers, and whether it will provide enough money to live on.”

¦ Create a support network. If you are over 50 and spent your entire life in an office environment, you may miss the social interaction of the workplace, so you need to find ways to incorporate social support in your life, Collamer says.

¦ Give your business time to grow and make money. It’s not going to happen overnight, Banda says.