WILL YOU FUMBLE IN RETIREMENT? 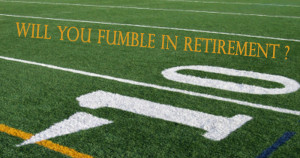 Luke had finally achieved his goal of playing on the high school varsity football team and was excited to play in big home coming game. The stands were packed and as they entered the fourth quarter he was sent back to receive a punt. The coaches considered Luke a sure-handed player with good speed and potential to play at the next level. However, none of that mattered when the punt slipped through his hands, bounced between his legs, and slowly rolled end-over-end, out of his reach as he was sandwiched by two opposing players running full speed.

As if the physical pain wasn’t enough, you could see the emotional anguish following the play as the other team recovered the ball with the game on the line. Luke was now left facing the 25 yard jaunt back to the sidelines. As you might expect, it seemed like a journey of a thousand miles that had nothing but bad news and angry sentiments waiting for him.

If you have ever made a mistake or caved under pressure, you know how it feels. Luke was ashamed, embarrassed and felt like a failure because he had let himself, his parents, his classmates and even the team down. It suddenly didn’t matter that he had an interception earlier in the game or that he scored a touchdown the week before. He was quickly and unexpectedly in a deep dark hole that he never planned for.

While no player ever practices running to the sideline with their head hung low in both guilt and shame, new existing, and soon-to-be retirees can feel the same way when they slip up. Nobody wants to practice making a bad investment choice, becoming a victim of fraud, or lying to their spouse or loved ones about spending or debt. However, it’s easy to mishandle money, mismanage your health, or misuse your authority at work.

These types of situations regularly come up in people’s lives, yet are more significant because they aren’t tied to a game or half-time popularity contest.

The truth is everyone is facing a challenge or demon(s) in their lives as result of some sort of fumble. This is why one of the most important things you need to do whether you’re just a few years away from retirement or already in it, is to PLEASE make sure you’re part of a good team and are surrounded with support and supportive people.

You see, earlier when Luke was in the midst of his big homecoming fumble, what didn’t get mentioned was what happened when he returned to the sidelines. When he got there, nobody yelled, ridiculed, or chastised him. Instead, he was greeted with high fives, slaps on the back, and smacks on the helmet. The conversation immediately switched to “getting it back” and “turning things around.” Even the coach chimed in, putting his arm around Luke reminding him, “Look the ball into your hands and secure it before you take off.”

It’s also the message and reminders that you may need now or sometime in the future. Secure your family, friends and financial professionals, don’t take off before things are right, and when you fumble, have a team to pick you up and help you focus on the future instead of the past.

Whether you’re already retired or just a few short years away, reading this blog is only the first step. We invite you to learn more about our comprehensive retirement planning process and how we work with clients, by clicking here , or you can request more information by calling (423) 247-1152

Next Steps: Take our cutting edge Retirement Priorities Quiz, download one of our FREE Retirement Guides, or get inspired with our Retirement Wellness Newsletter.